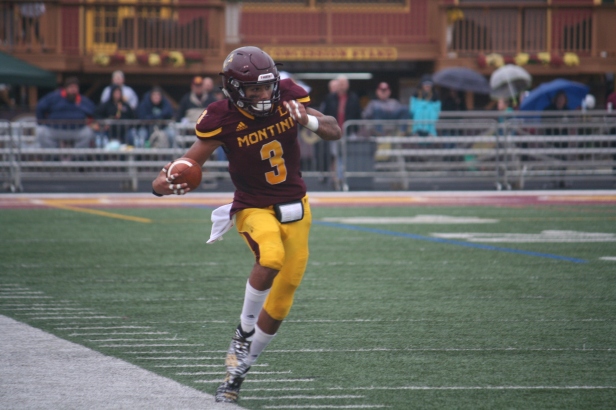 After the annual Homecoming game was pushed from Friday to Saturday due to inclement weather, the Montini Broncos overcame a fourth quarter deficit for the second consecutive game, scoring the final 20 points en route to a 33-14 triumph over St. Viator. Montini received the opening kickoff and advanced all the way to the Lions’ 25 yard line, where the drive stalled. The Bronco defense forced a Lion punt on the ensuing possession, but Montini fumbled the punt and St. Viator recovered the football. St. Viator would take advantage of the mistake and score on a Lucas Barisas touchdown run to take a 7-0 lead. Montini answered right back, driving 65 yards in seven plays, with Deontay Bell scoring on a one-yard run to tie up the score. Neither team would score again until just before halftime, when Bell connected with Paul Flicek for a 14-yard touchdown to give Montini a 13-7 halftime lead.

The second half would continue to be a defensive struggle, as neither team was able to generate much offensively. The Lions punted on their first possession of the half, while Montini missed a field goal attempt. St. Viator drove down the field following the missed field goal and retook the lead on a one-yard run by quarterback Jack Mahoney. The Broncos reclaimed the lead on the next possession, as Bell scored on a 27-yard run. After forcing a 3-and-out, Montini scored again on Bell’s third rushing touchdown of the afternoon, this one from two yards out. A Devin Hoovel interception on the next St. Viator possession led to the game’s final scoring drive, capped off by a five-yard run by CJ Bufkin.

In lower-level action, the freshman Broncos defeated the Lions 35-15 on Saturday, while the JV Broncos were victorious by a 15-8 final score. Montini resumes play in the CCL/ESCC Green Division this week with a match-up against Notre Dame College Prep on Friday, October 4th, at 7:30 PM. The freshman game will kick off at 5 PM Friday before the varsity game, while the JV game will take place at 6 PM on Monday.